Mother Nature rules the weather, but that doesn’t mean she can’t use a hand now and then. 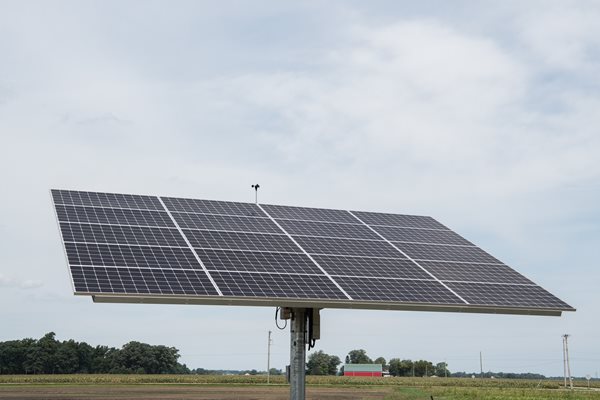 A large solar tracking system standing sentinel outside The Chef’s Garden’s in-progress, state of the art research facility is doing just that.

The system’s panel looks like a giant’s enormous flat screen television, but the unit, installed early in July, is there to harness as much solar energy as it can between sunup and sundown.

Plants being researched in the facility will be part of a multi-layer setup in the building’s attached greenhouses. LED grow lights powered by the captured solar energy will allow for nighttime lighting.

The rotating action of the solar tracker allows it to produce 50 percent more energy than a solid mount panel (the style typically seen mounted on rooftops). To do so, the tracker rotates on a dual-axis swivel, following the sun’s arc from east to west so that its “face” remains at a constant perpendicular angle to the sun for optimal energy absorption.

The solar tracker is manufactured by AllEarth Solar, a Vermont company. (Jones said AllEarth Solar builds its solar system components with American-made materials, which gave them a distinct edge over their competitors.)

Via an internet connection, the company can remotely access the unit as needed for adjustments or to troubleshoot. The online connection also records daily calculations of how many kilowatt hours the tracker generates each day.

A continuously updating bar graph showed that July’s numbers were consistently high, but August’s recent string of rainy, cloudy days showed up as a dip on the graph. As summer turns to fall, Jones said shorter daylight hours will have a direct impact on the unit’s power generation as well.

In addition to solar energy, Jones said he is continually exploring and researching other methods of on-farm energy production for the future − options that dovetail with The Chef’s Garden’s pledge to sustainable farming practices. To meet the farm’s sustainability criteria, Jones said potential methods require three things.

“Is it environmentally friendly? Is it socially responsible? Is it economically viable?” Jones said.

Been Doing it for Years

Those three touchpoints are nothing new at The Chef’s Garden. Some of the farm’s other “green” practices include a biofuel burner in one of the large greenhouses that heats water than runs through an underground network of tubes to warm the soil. Corncobs from a neighboring seed-corn farm is the burner’s primary fuel. When the corncobs run low, Jones turns to pellets made from recycled waxed cardboard − the byproduct of a large paper mill. 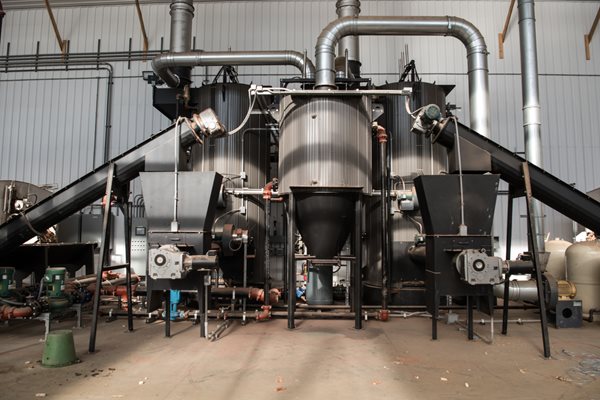 The farm’s own discarded (unwaxed) cardboard is baled and taken to a nearby roofing manufacturer where it is made into asphalt shingles.

“All of our packaging materials are either biodegradable or recyclable,” Jones said. “Composting and cover crops increase soil biology and reduce the amount of fertilizer used. We heat our maintenance shop with used motor oil.”

Jones explained that whenever the farm mechanics change the oil on a truck or tractor, the used oil becomes fuel to power the shop’s forced air furnace.  “We can either use it, or pay someone to take it away,” he said.

A Way of Life

Solar power is just the latest example The Chef’s Gardens’ efforts to minimize waste, conserve energy and be responsible caretakers of our land, our air, our neighbors, our business and, most importantly, our chefs.

“Farmers have been sustainable their entire lives – been good stewards of the earth,” Jones said. “Solar is just the next and the newest.”